Escape the About Page, Episode 1

Next in series: Episode 2

My company hires an artist to draw caricatures of all our employees. We take these and put them on our about page. It looks like this:

When I joined in August 2015, the same artist drew a picture of me:

I didn’t really like version 2 either, but I had to admit that the problem was probably me. Since I didn’t want to ask for a third version, I just skipped the onboarding step where I was supposed to add my picture to the website.

Visnu was my onboarding buddy. He nagged me for a while to add myself to the website, but I never did. Eventually he stopped nagging.

Every Friday we have a company all-hands meeting where we demo our recent work.

At this point I had been at Opendoor for eight months, so I had almost forgotten that I wasn’t on the website. But apparently Visnu hadn’t forgotten, and he quietly added me that week:

He triumphantly presented to the company that I was now on the website despite my best attempts to hide. There was great applause; everyone laughed. I didn’t laugh. I was furious.

Visnu even wrote a test to make sure I couldn’t sneak off the website again. He’s thorough like that.

I interpreted the test as a challenge to sneak off the website again.

All our code goes through review. To make a change, you submit your code on Github, and another engineer reads through it. If they don’t have any concerns, they add an lgtm (“looks good to me”) label.

So to sneak off the website, I would have to change the code in a way that would be subtle enough to pass code review. Bonus points if the reviewer was Visnu.

Step 1: Change enough code that no sane person would read it all carefully.

I found a CSS file that was 422 lines long, and could be broken up into multiple files. I broke it up. (That was actually a change I’d been wanting to make anyway.)

The HTML for our “about” page looks like this:

I wrote some CSS so that whenever an image has “alexz” in its filename, it will be invisible.

Most people don’t work at 10pm, but Visnu will often appear if you tag him asking for a review.

If you looked at the website in the next few days, you would have seen something like this:

After about a week, I started feeling guilty. The “about” page looked broken because of the blank space where I was supposed to be; one of my co-workers even filed a bug report about it.

Luckily for my guilt, Visnu figured it out pretty soon. In typical Visnu style, he didn’t just fix the website – first he wrote a bot to monitor the page and make sure I was there. If I wasn’t, the bot would sound the alarm. 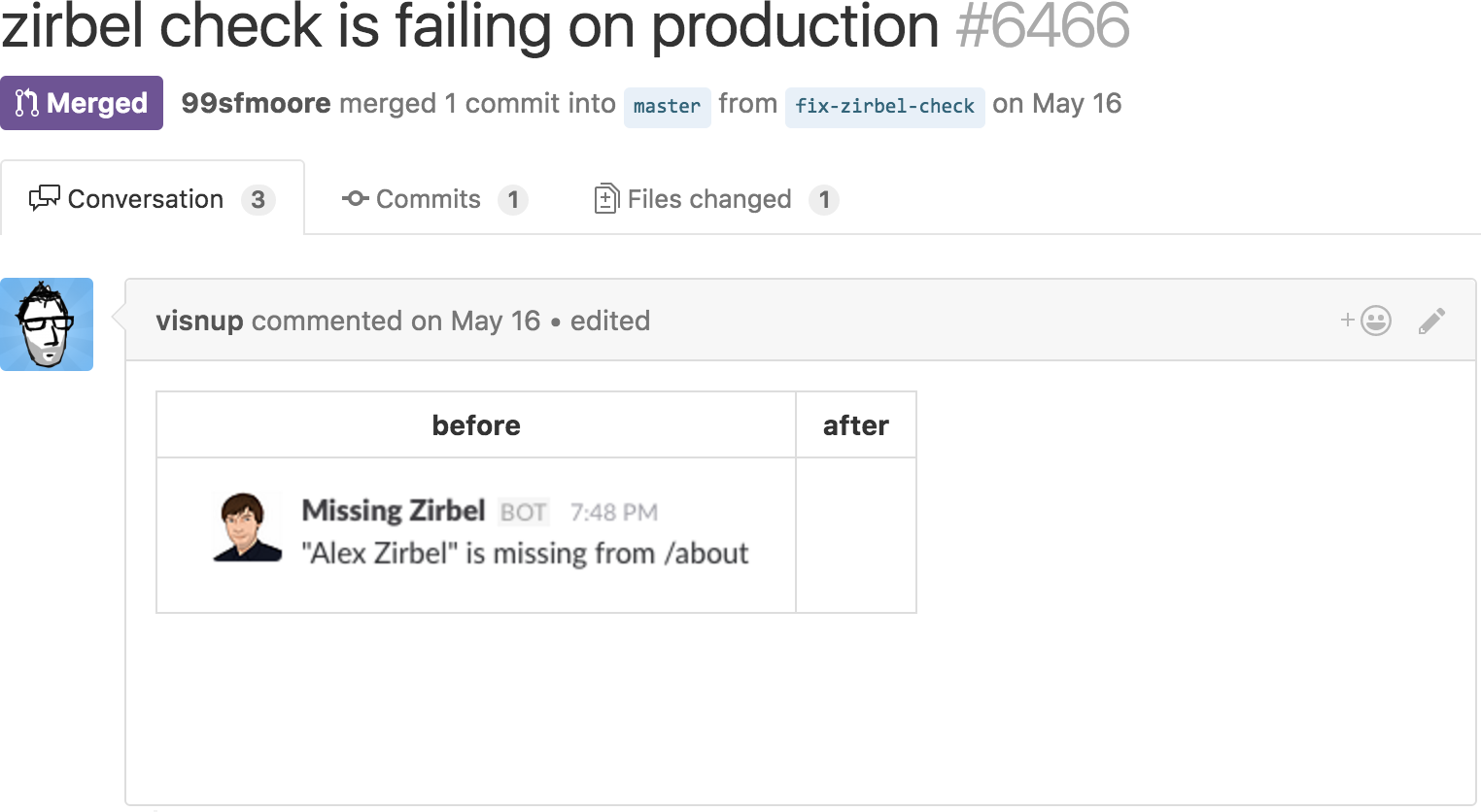 Total days in hiding: 11
Total days on website: 7 (and counting)

Next in series: Episode 2

Hi, I'm Alex. I'm an independent software developer based in San Francisco. Previously, I worked at Opendoor and Addepar.